If you're looking to get into crowdfunding, one of the easiest ways to see what works and what doesn't is by looking at some of the most successful projects out there. Kickstarter helpfully maintains a list sorted by type of the top crowdfunded projects they've hosted, both in terms of money made and the amount they overshot their goal.

So, let's take a look at a few of the real winners and see what they did right, and what you might be able to learn from them!

As of writing, the winner appears to be the Pebble e-Paper Watch, which managed to overshoot its initial goal by more than ten thousand percent, and getting more than ten million dollars in donations.

Why did it succeed? Well, first of all in pure honesty, it's a really cool idea. More importantly, though, they explore the implementation well. On the front page, you can see pictures of the Pebble doing everything from telling the time to gauging golf ball drive distances. Even someone who didn't take time to watch the video - which is well-produced but unexceptional - could immediately see reasons to be interested.

Also, they got noticed by the mainstream media. Notice their quotes page includes a variety of sources including The Verve, Forbes, and legendary sci-fi author William Gibson.

Lessons learned: Fully explore the potential of your concept, and solicit big names to back you. 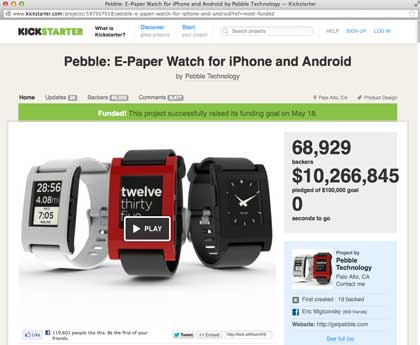 The most successful crowdfunding project on Kickstarter in terms of ratio of goal to final tally is an odd one: a set of gaming miniatures that exceeded its funding goal by over 11,000%.

One thing I especially like about this Kickstarter is that gigantic Advent Calendar-like graphic in the middle that showed constant updates on the progress of the project. It's a great way of engaging people. The lengthy graphic showing the figures under discussion was also quite well-produced, with clever copy aimed straight at its niche market.

Oh, and he pulled this off despite not even linking his project to Facebook, something I'd normally consider unthinkable.

Here's an interesting one: Rescue The Historic Catlow Theater From Extinction. A historic theater in Chicago was in danger of being torn down, and crowdfunding was used to raise the funds to save it.

Their copy is very clean, readable, and -unusually for this type of thing- generally not too melodramatic. They present a number of reasons the Catlow was important to Chicago, and clearly outline why they want the money and where it will be going.

Also, notice the neat interactive elements to their high-end rewards. $2,000 allowed a patron to be a guest projectionist for the evening. Another allowed for a private showing of the film of your choice.

There are too many to go into detail on, but take a look at Kickstarter's Small Projects page, and just how easy it seems to be to raise <$1,000. Some of these are frankly pretty amateurish, but thanks to their low goals, they still completed successfully.

Lessons learned: Modest requests have a good chance of finding funding if they have any appeal at all.

Finally, just for a counterbalance, we'll leave you with this list of The 37 Saddest Failed Kickstarters and leave you to ruminate on things to not do with your own crowdfunding.