While having a conversation with a neighbor the subject turned to gardens, scrumptious food and then Genetically Engineered (GE) foods. I mentioned that the FDA has never performed tests to make sure these products are safe and my neighbor’s reaction was disbelief. She’s a smart lady and could not fathom the government agency responsible for ensuring America’s food safety had never tested to make sure GE foods are safe to eat.

I don’t have statistical data but it’s a good bet that, like my neighbor, most Americans assume testing has been done to make sure Genetically Engineered (GE) foods are safe. Isn’t that why the FDA exists?

The companies that make GE food products do not test them for safety. As I stated in my last Blog GE food manufacturers don’t think it is their job to test. The example I gave was Phil Angell, Monsanto’s director of corporate communications saying it is the FDA’s job to “vouchsafe” food. The trouble is, the FDA says it’s the job of the GE food manufacturer to make sure their food is safe.

In October 1999 James H. Maryanski, Ph.D, Biotechnology Coordinator for the Food and Drug Administration (FDA), testified before Congress. You can read the transcript of his entire testimony here. His specific quote about this subject is: "It is important to note that the Act (adulteration provisions of section 402(a)(1)) places a legal duty on developers to ensure that the foods they market to consumers are safe and comply with all legal requirements." Here is the place on the page where the text resides.

Phil Angell of Monsanto and Dr. Maryanski of the FDA are accomplished people with highly responsible positions. Many would find it extraordinary to think that the FDA and GE manufacturers are not on the same page on this critical point. My word for it is unacceptable.

In his testimony before Congress Dr. Maryanski states that the FDA is in control of GE foods. Yet his statement before congress makes it clear that FDA policies are rife with assumptions and flawed logic.

Dr. Maryanski puts forth the notion that traditional crossbreeding methods like grafting and hybridization are pretty much the same as genetic engineering via gene splicing. He soothingly notes that nectarines are “genetically altered” peaches and tangelos are a hybrid of tangerine and grapefruit.

The simple truth is crossbreeding and genetic engineering are radically different. In his own testimony Dr. Maryanski notes two major differences:

1) The new technology allows for greater precision and predictability about the qualities of the new variety.

2) It gives us the power to cross biological boundaries that could not be crossed by traditional breeding. For example, they enable the transfer of traits from bacteria or animals into plants.

He dropped this bomb without a hint of hesitation. He’s like the Courtier who brings out the Emperor who has no clothes and then describes garments in lavish detail. The fact is radically new food technologies are on the market with no direct testing for safety.

Here is a direct quote from Dr. Maryanski: “Because FDA determined that bioengineered foods should be regulated like their conventional counterparts, FDA has not to date established any regulations specific to bioengineered food.”

Why would a revolutionary breakthrough such as Genetically Engineered (GE) food use the same safety standards as traditional foods? These foods are sold to farmers as new and different. They were created to perform differently in the field. Why is there an assumption that these products will perform no differently in our gut?

The question is: do these new foods pose new risks that the safety standards of traditional foods are not designed to cover? My admittedly rhetorical question is: how can they not?

Logical flaw #3: The assumption of safety

Dr. Maryanski and the FDA assume Genetically Engineered (GE) foods are safe. The legal provision is “Generally Recognized As Safe” (GRAS). Their so-called logic is that whole foods such as fruits, vegetables, and grains have never been subject to premarket approval because they have been used as food for a long time.

Here is a quote from Dr. Maryanski:

Let’s dig a little deeper into the statement “functionally very similar.” How does Dr. Maryanski know that GE proteins, fats, and carbohydrates are similar? He cites no testing to support this claim. If there is no testing he can't know this which means he's making it up.

This presumption is at the core of the FDA’s flawed logic.

The function of GE proteins, fats, and carbohydrates are either the same as in non-GE foods or they are not. If they are not the same we need to know by how much. This is why testing is imperative.

Stay tuned: the supposedly subtle differences in the proteins, fats, and carbohydrates are having a big effect when they are actually tested in a laboratory.

Little or no testing on GE foods has been done in the USA because American government agencies like the FDA are dominated by big business. Evidence to support this statement comes from Jeffrey Smith, author of Seeds of Deception.

Mr. Smith notes that the FDA's own experts agreed that GE foods are different and might lead to hard-to-detect allergens, toxins or nutritional problems. They urged their FDA superiors to undertake long-term safety studies. These requests were ignored. Conveniently, the person in charge of FDA policy at the time was Monsanto's former attorney who later became their vice president.

Outside of the US several meaningful studies conducted by major universities have been performed. Each indicates GE foods are NOT safe. Here is a review of just four of those studies:

2013
Hussein Kaoud, a scientist at Cairo University’s Faculty of Veterinary Hygiene tested genetically modified food on mice and rats. His results were alarming and corroborate the conclusions of other international, independent scientists. In Kauod’s test only 10 percent of the animals’ diets was from GE sources, the remaining 90 percent was conventional, non-genetically modified food.

Kaoud, fed nine groups of rodents different genetically modified foods such as potatoes, corn, grapes and tomatoes. He recorded shrinkage of kidneys, change in the liver and spleen, appearance of malignant parts in the tissues, kidney failure and hemorrhages in the intestine. Immune response was lower and brain functions were compromised with rats’ learning and memory abilities seriously altered.

Kaoud noted a 35 percent increase in the death rate of baby rats when the mothers ate GE corn when compared with babies whose mothers ate natural corn.

2012
Tests performed by Dr. Gilles-Eric Seralini a molecular biologist at the University of Caen came to the conclusion that GE foods were not safe because they were carcinogenic and compromised liver and kidney function. (see my pervious Blog)

2005
Irina Ermakova, a leading scientist of Neurophysiology at the Russian Academy of Sciences (RAS), performed a study of GE soy flour added to the diet of female rats. Other females were fed non-GE soy or no soy at all. This diet started two weeks before the rats conceived and continued through pregnancy and nursing.

Ermakova noted that pups from GE-fed mothers were substantially smaller. After 2 weeks, 36% of them weighed less than 20 grams compared to 6% from the non-GE group.

1998
Arpad Pusztai of the Rowett Research Institute in Scotland is widely considered one of the world’s leading biochemists. Since the US wanted to export a Bt genetically modified potato to the UK Arpad took charge of a team of scientists to determine the effect of the potato on lab rats. Note: Bacillus thuringiensis (or Bt) is a bacterium, commonly used as a biological pesticide.

His results were stark.

Pusztai discovered that the rats fed the genetically modified potato showed pre-cancerous cell growth in the digestive tract, they had smaller brain, liver and testicles, with partial atrophy of the liver and a damaged immune system. His findings showed that genetic engineering caused the damage to the rats NOT the insecticide that was sprinkled on the non-GE potato.

Pusztai announced the results of his experiment on British Television in 1998. The following day he was fired and his research team dismantled.


Conclusion: Our Food System Is Not Safe

People from all over the world are coming to the conclusion that GE / GMO foods are unsafe to eat and an unreliable farming tool (see my prior Blog about weed resistance). Listen to this interview with Jeffrey Smith, author of Seeds of Deception and you’ll find out why scores of cotton farmers from India are committing suicide over GE crop failures. You’ll also hear why Zambia said no to GE food aid when scores of its people were starving.
Here are a few follow-up articles that show how world opinion of GMOs is waning.

2012
European Union Regulates GEs (GMOs)
The European Union (EU) may have the most stringent GE / GMO regulations in the world. All GMOs, along with irradiated food, are considered "new food" and are subject to extensive, case-by-case, science-based food evaluation by the European Food Safety Authority (EFSA).

2002
Zambia rejects GEs
Zambia, which was suffering from a severe food shortage, said, "No thanks," to U.S. shipments of genetically modified foods sent to alleviate the crisis, citing the great unknowns of GM food and saying that Zambians should not be test cases.

Genetically Engineered foods traverse barriers that would never be crossed in nature. This is one of the worst foundations for a food source. Why? Because basing any food technology on processes that work outside and against natural systems will not work for long because the biology in our gut is based on those systems.

Natural systems have have developed over millions of years. They have been honed with uncounted Darwinistic testing trials. What we have in the natural world are the success stories from all that testing. It is pure arrogance to think we can bulldoze our past all that natural R&D, DNA is much more complicated than we know.

GE products only work for a tiny percentage of people, for a relatively short period of time. These are the people who make billions at the expense of those who fall sick, whose lives are ravaged when their farm operations knuckle under, and to people everywhere because the power of food security cannot be trusted to a few elite corporate leaders. 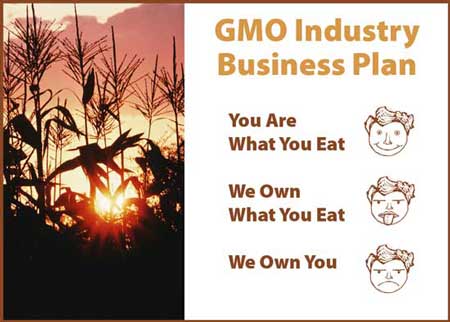 What can you do to stay away from GEs / GMOs?

Or, you can go to the App Store and download the non-GMO iPhone App.

This Blog is a public service offering from DeepSky Marketing. If you have a wholesome, sustainable or life enhancing product or service you'd like to go to market with give us a call at 707 823-3888 or email Jeffrey@DeepSkyMarketing.com
Share this content
Posted by Jeffrey Schmidt