I'm more affected by the passing of Steve Jobs than I ever expected to be and I don't know why.

Maybe it's because I'm in the marketing business and I respected this man who showed us how to build an organization that was at heart a marketing company. Apple was aligned with his vision of simplicity, elegance and perfection. Perhaps it's because I'm a life-long user of his products. I've been using Mac's since the late 80's. It could be that I'm affected because his comeback from defeat was so thorough that he got to see his company be ranked #1 on Wall Street.

Steve Jobs knew what people wanted. He was the Picasso or John Lennon of marketing—a virtuoso. Jobs never did market testing. He went with his gut. He knew if he loved something that others would too. Regis McKenna, a Silicon Valley marketing executive, said that Jobs genius lay in his ability to simplify highly complex products into one elegant solution.

Apple has triple the margin of H/P, which is of course another legendary company. Not only does Apple make the best products in the world, they are seen as such which is not accident.

Seen as the best spokes person

Steve Jobs' ability to articulate his vision was legendary. There is no more visible CEO of a company in the world. His presentation techniques have been studied and well chronicled. There was nobody better at communication that Steve Jobs.

Nobody envisioned how technology would impact our lives better than Steve Jobs. He saw how the "digital hub" would come into our lives and he made the products that allow us to take full advantage of technology in the most user-friendly way possible.

Maybe Steve Jobs' reach was greater than any of us expected. I don't know why I feel as if a close friend or relative is lost. I never met Steve Jobs in person. The way I know him is by using, and enjoying, his products every day for decades. This has made me closer to him than I realized. 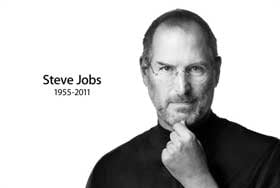