Why should you invest in Facebook's initial public offering (IPO)?

Well, Facebook’s IPO is looming, and there’s one question on everyone’s mind: should I invest in Facebook?  Well, we wish we could give you a simple answer about that. Even if we pulled our trusty crystal ball back out, the plain truth is, it could probably go either way.

So, we’re going to split the difference. (Or cop out, if you prefer.) Today’s article will be focused on why you should invest in Facebook, due primarily to its amazing success thus far as a marketing vehicle that’s pulled in hundreds of millions of members. Then in our next installment of this gripping series, we’ll change out our bull’s horns for a bear’s ears instead, and tell you why you shouldn’t.

The key issue to focus on here is separating out the user experience from the actual profit-driving (or, at least, potentially profitable) portions of Facebook.  It’s easy to go onto the site and see nothing but a lot of moms sharing recipes and kids sharing Internet memes. However, that’s all sort of a sideshow. It’s just there to get people in the door and keep them there.

Participation and an open mind

Not only are droves of people signing up for Facebook, they are participating at a phenomenal rate (see Nielsen graph below). Facebook is dominating user time spent on the internet and this is critical for marketers who need an audience that is present. But there is another significant detail to this user-time phenomenon. Facebook is the place where people are actially being social on the Internet. This means marketers will have access to audiences who are in a more open and participatory mindset, and this is worth its weight in gold. 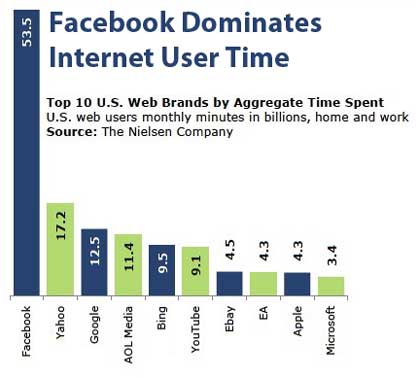 The Facebook user experience has gotten a LOT of people through the door — here’s somewhere around 850 million Facebook users already worldwide, and many estimates expect that number to rise to over 1 Billion by the end of 2012.  That’s 1/7 of the entire population of the world, all logged into the same site and giving it their information.

That information is the key to Facebook’s future success.

Facebook has two primary sources of future revenue. The first is that it’s turning into one of the dominant marketing platforms on the Internet.  It’s not just about the sidebar ads and banners, it’s also about the direct connection it allows between companies and their fans. The more people click “Like” and “Share,” the more data Facebook gathers about them to help target their ads. As their database grows, their ability to precision-target incredibly focused demographic groups will grow with it.

And that’s going to be very valuable to marketers in the years to come.

Further, being a part of this would give you valuable insight into the entire process. As a shareholder, you’d be privy to many of Facebook’s secrets, which would in turn allow you to refine your own Facebook marketing.  This would give you a significant advantage that goes beyond the basic question of whether the stock is going to go up or down.

The other revenue source for Facebook is the one that I think many people are wrongfully overlooking: data mining.  The information and statistics that Facebook has compiled on their users goes far beyond simple product likes. They are sitting on what is probably the single largest and most comprehensive database of human information ever compiled. That is a goldmine just waiting to be plumbed, by everyone from census-takers to social scientists.

While they have not yet really leveraged this aspect of their business, they almost certainly will soon. How could they not, considering the pressure they’ll be under from their new investors to find new revenue streams? This is probably their single greatest resource, and it’s just waiting to be tapped.

In short, Facebook’s potential for amazing growth and innovation in the future outweighs concerns that they may be over-hyped. Buying into them doesn’t just mean buying a share of what is already one of the most influential companies in the world; it will also give you a direct line into that company that will help your own marketing efforts. Our recommendation is to buy at least one share of Facebook so you will receive insider information about this marketing juggernaut. This information alone will be worth the price of admission. Now the question remains: should you buy into Facebook as a financial investment? For more information on that see our next installment in this series which is why you should NOT buy into Facebook.