Surely one of the most baffling aspects of Facebook for both newbies and oldtimers alike is how Facebook determines what does and does not appear on a person's news feed. However, understanding how this works is a vital aspect of Facebook marketing. It doesn't matter how many Facebook posts you make in a day if they aren't showing up on your friends and followers' news feeds.   (At least once a day is best, incidentally.)

So, in this pair of posts, we're going to look into this and try to shed some light on how to make the most of your Facebook marketing. The key to this is understanding EdgeRank.  Part one is going to go over the basics of how EdgeRank works and what factors into it.

When it comes to getting into news feeds, all that matters is your Edge. “Edge” is a somewhat tricky internal Facebook term that basically encompasses any sort of public activity you take on Facebook: posts, comments, tags, and soforth. However, “Edge” also covers how influential and relevant you are to each of your followers. So, it's a combination of both content and relevance. The formula for how Facebook decides all this is called the EdgeRank.

Facebook is probably never going to release all the specifics on how EdgeRank is calculated, but a couple years ago, they did release a formula that covers the basics. Here it is: 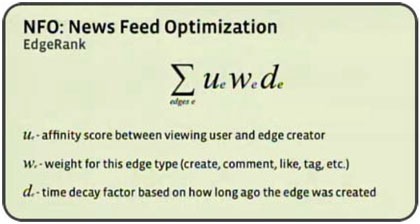 If you don't know calculus, don't worry; you won't be tested at the end. What this is saying is that EdgeRank is made up of three distinct factors – Affinity, Weight, and Time.

So, the key to good Facebook marketing is to maximize all three factors. Let's break down what each of them means.

Affinity: This is how closely related you are to a friend or follower. If you go onto someone's Facebook page and Like a post or comment on it, that increases your affinity to them. However, it's worth noting that this only goes one way. If Jane Smith comments on a post John Doe made, this increases her affinity towards him, but – and here's the important part – not vice-versa. His posts are more likely to show up on her news feed, but her posts are no more likely to appear on his.

Weight: This calculates how relevant your contributions are to the community at large. To start with, each sort of Facebook activity you can engage in has different weight, although the specifics of this are one of the things Facebook hasn't made public. However, from experimentation it appears that weight basically comes down to how much effort an activity takes. Commenting takes more effort than pushing a Like button, so commenting has more weight. In terms of things you can post, photos and videos seem to have the most weight, followed by shared links, and then status updates.

Time: This one, at least, is pretty obvious. The more current something is, the more likely it is to show up in a news feed, and there's a steep drop-off as the hours pass. Again, exactly how Facebook calculates this is unknown, but global trending appears to be a factor in it. A hot news topic that many people worldwide are all talking about will have a higher Time ranking than a local issue.

Got all that? At this point, you should understand the basics of how EdgeRank works. In our next installment, we'll discuss some of the ways you can use EdgeRank to boost your Facebook marketing. See you then!